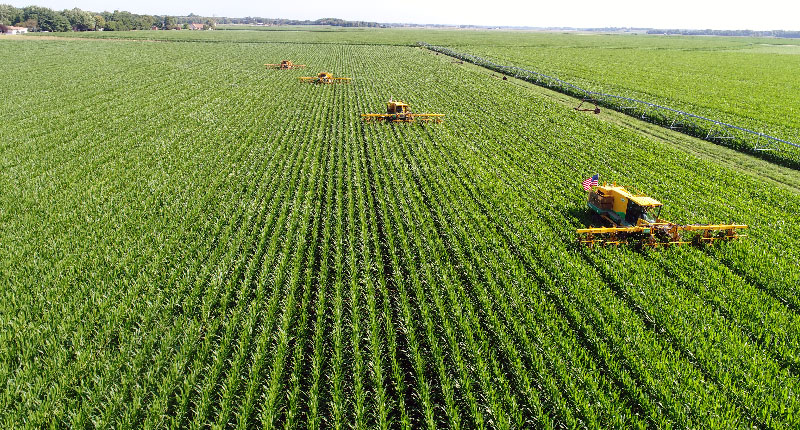 NTR utilizes the latest technology available in guidance and height adjustment to give you the best possible results seed corn detasseling. At today’s prices, a half leaf saved goes a long way for your bottom line.

View the video below to watch NTR detasselers at work.  Read about the process of seed corn detasseling below.

Pollination occurs when the pollen falls off the tassel and then blows through the wind and eventually comes in contact with the silk on top of the ear of corn.  Once the silk has been pollinated, it becomes dry and brown, indicating that the pollination process is complete.  Each silk that is successfully pollinated will create a kernel of corn at its base.  Following pollination, the ear of corn will continue to grow.

Why is corn detasseled?
Corn producers no longer save part of the corn crop to use as seed as they did 50 years ago.  With the advent of corn hybrids, growers now produce considerably more corn.  In the 1960’s a good corn yield was considered 60 bushels per acre.  Today, U.S. corn growers expect 160 bushels and higher in the better growing areas.  These incredible yield increases were made possible by corn hybrids — crosses between two different types of corn. Cross pollination resulted in a hybrid corn.  Controlling the pollination is key to producing hybrid seed corn.

How does pulling the tassels off of corn plants [detasseling] result in hybrid seed corn?
The top of the corn plant (the tassel) contains the pollen that allows corn plants to reproduce.  It contains the sperm that fertilizes the ovaries at the base of each corn silk to produce a kernel of corn. Detasseling removes the tassels from the “female” rows of corn which the seed corn grower wants to be pollinated so that the “female” rows cannot self-pollinate.   Leaving the tassels on only the “male” rows allows the female rows to receive pollen from the “male” plants which are a different type of corn plant than the “female” plants.  This produces ears of corn that become special hybrid seed corn that farmers will plant next year.

Corn detasselers remove all tassels from the female rows.  The male plants, planted in the single rows are NOT detasseled. The pollen from those plants pollinates the silks on the “female” plants that were detassled, resulting in hybrid seed corn kernels.

What is the end result?
The seed from the detasseled (female) plants is then harvested for use as hybrid seed, used in the commercial production of corn. In order to be sold as certified seed, 99.7% of the tassels must be removed from the female line, within a very narrow time frame. The new hybrids are much more vigorous and higher yielding. Major improvements have also been made in such traits as early maturity, disease resistance, drought tolerance, and insect tolerance. Almost all commercial corn grown in the US comes from hybrid seed.

Corn is the number one cash crop in the Unied States, with a value of over $76 billion. Even though the hybrids are better yielding, better resistant to disease, and more vigorous, they do not pass this on to their offspring. Each generation must be bred anew.